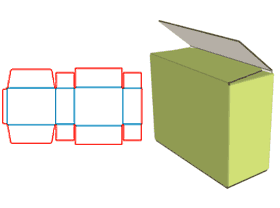 This is the international standard corrugated carton 02 box type. Box type is 0204 box type on the basis of increasing the size of the rocker cover, the bottom and bottom added a layer of flat cardboard, more consumption.

In general, use the standard box type.However, different manufacturers may according to the need, do some improvements and produce a kind of new structure based on the standard type, with a suffix to annotate, 0201-2, for example, a retrofit type of 0201 carton.

02 Box: It is the most common slotted carton (slotted -type boxes)
1 Made by a corrugated paper board, both shake covers without independent separation, conjoined shake cover can seal carton.
2 Generally, die cut box need to use a pin, glue or tape to joint.
3 When using, need to hold out the billet, seal the upper and the lower shake covers, make the carton.
4 Four carton forming ways: manual (M), automatic(A), manual or automatic(M/A), semi-automatic and manual (M + A).
5 Because box billet can do folding during transportation, transportation cost is low. Because the corrugated wall along the height direction, with good ability against the high pressure.